Prioritising assignments in your consulting world, and your life

Prioritising assignments in your consulting world, and your life

Time is precious, let’s not waste it. I often have two main pressures when it comes to time: feeling like I have too much of it on my hands and feeling like I should be busier, and then saying “yes” one to many clients, school, family or community requests, and then having a strong desire to be less busy, and less over-committed (as an aside, I’ve decided that there’s very little room between these two states, but this may just be my own personal challenge!).

When I get into the “not enough time in the day” situation, one of the most useful things I do is:

Dwight D. Eisenhower was the 34th President of the United States from 1953 until 1961. Before becoming President, he served as a general in the United States Army and as the Allied Forces Supreme Commander during World War II. He also later became NATO’s first supreme commander.

Dwight had to make tough decisions continuously about which of the many tasks he should focus on each day. This finally led him to invent the world-famous Eisenhower principle, which today helps us prioritize by urgency and importance[1]. 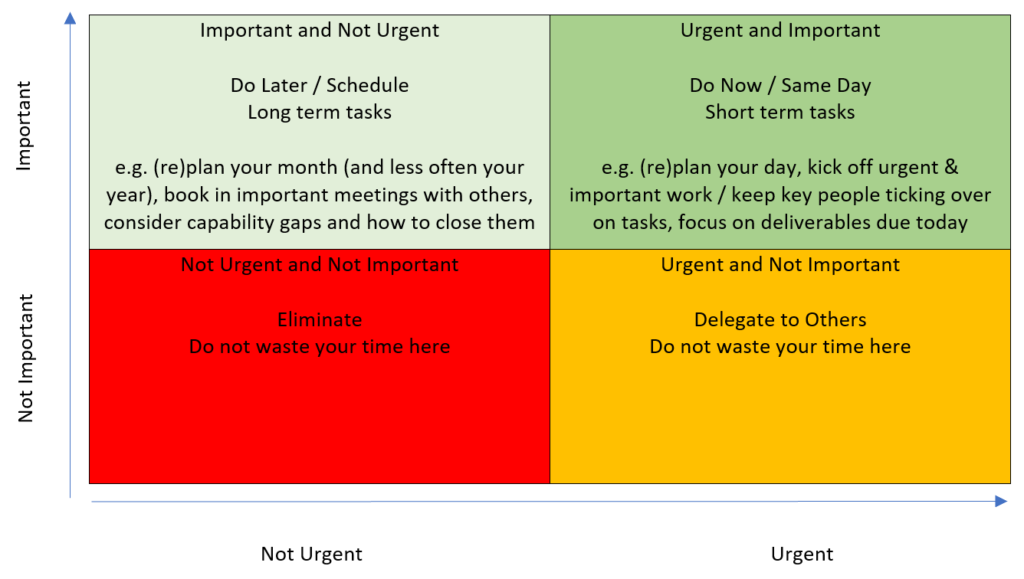 If you want to help reduce assignment delivery stress, I suggest you use the Eisenhower matrix and assign your ‘to do’ list to each quadrant. A few tips on how to use it:

A good time manager leaves fewer things unplanned and tries to manage most of their work in the top left quadrant (important and not urgent), reducing stress by scheduling what would otherwise become urgent and important to-dos to a reasonable date in the near future whenever a new important task comes in.